Congratulations to Olivia McEvoy, Kiera Mueller and Louise Firth who have been named in the team for the first time. 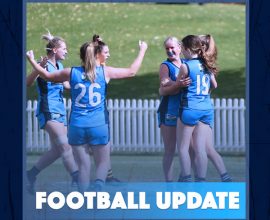 We’re seeking a committed, experienced and knowledgeable sports trainer to take up the challenge of our ‘Women’s Programme’ teams –

Sturt’s Senior Squads – men and women have hit the track in preparation for the 2018 season. Sturt Pre Season