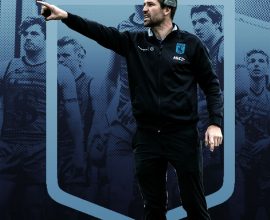 The Club is pleased to announce the signing of James Mathews. The 23-year-old, half forward played for the McLaren Eagles