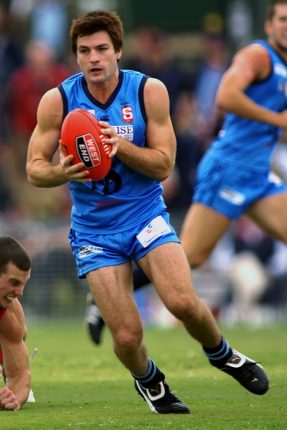 Luke Crane was originally from George Town in Tasmania and was an elite junior footballer who represented Tasmania at both Under 16 and Under 18 level and also played with the Tassie Mariners in the TAC Cup.

He made his senior debut for the George Town Saints in the Northern Tasmanian Football Association (NTFA) as a 15 year old in 2001 and was a member of their premiership teams in 2002 and 2003 and was recently inducted into the Tasmanian Football Hall of Fame.

After being overlooked at the AFL draft Crane moved to Queensland in 2004 and joined QAFL side, the Zillmere Eagles, winning the club’s Best and Fairest award in each of the next three seasons while also representing Queensland in interstate matches against Western Australia and the ACT.

A quick, skilful and courageous rover who had an eye for a goal, Luke was recruited to Sturt in 2007 and had an outstanding debut year, playing in all 21 games, winning the P.T. Morton medal, coming runner up in the Magarey Medal and being selected in The Advertiser SANFL Team of the Year.

Crane went on to win the Magarey Medal the following year and became only the second Tasmanian to do so and was also a key member of the SANFL State team that beat the VFL by 65 points that year.

He went on to play in the 2009 Grand Final against Central District and won the P.T. Morton medal for a second time in 2011 before retiring from the SANFL at the end of the 2013 season after playing 125 games and kicking 113 goals during his time at Unley.