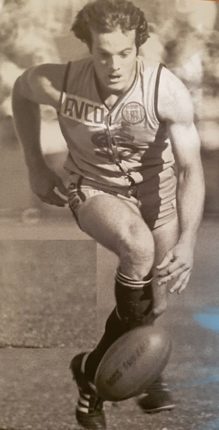 Greg Whittlesea grew up on a dairy farm at Second Valley near Yankalilla and was actually a Glenelg supporter before beginning his highly decorated career with the Double Blues.

He progressed through the junior ranks winning the Under 17’s Best & Fairest along the way as well as representing South Australia at the Teal Cup and made his League debut as a 17 year old in Round 6 of the 1981 season against North Adelaide at Prospect, a game in which Sturt won by 4 points after he kicked the winning goal.

Greg went on to play a further 9 League games in 1981 and also won the Reserves Best & Fairest before having a breakout year in 1982 playing as a defender and being selected in The Advertiser SANFL Team of the Year.

Highly skilled, determined and fearless, Greg played in the 1983 Grand Final against West Adelaide and then went on to spend more time in the midfield.

At the end of 1986 he was drafted by Richmond with pick 56 at the VFL National Draft, but he decided to remain in Adelaide and was subsequently appointed captain in 1987.

A humble champion and inspirational leader who led by example Whittlesea had an outstanding 1988 which saw him win the Magarey Medal, achieve All Australian selection and win the P.T. Morton medal for the second time in succession and also lead the Blues back into the finals after a 2 year absence.

Greg was drafted again, this time by Hawthorn with pick 20 at the 1990 AFL Pre-Season Draft and decided at the end of the 1990 season after 234 games and 88 goals for the Double Blues to make the move across the border.

Whittlesea found it hard to break into the star studded Hawks line up and only played 4 games during his stay there before being delisted at the end of 1992 and due to the toxic situation at Unley at the time as well as wanting to play more finals football decided to join the Tigers upon his return to South Australia.

After retiring from the SANFL after 2 years and 17 games with Glenelg Greg continued his football career with Yankalilla in the Great Southern Football League playing 168 games before finally hanging the boots up for good in 2004.