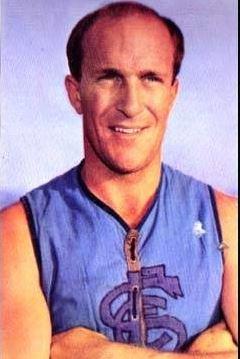 John Halbert was an extraordinary footballer who was in a class of his own in 1961 and finally won the Magarey Medal despite the club finishing bottom after coming runner up in 1955 (his debut season), 1958 and 1960.

A copy book footballer who did almost everything with exaggerated correctness Halbert became a dominant centre half forward due to his formidable strength and marking ability when moved there in 1964 by Coach Jack Oatey.

Renown for his excellent disposal, strong overhead marking and impressive ground play Halbert captained Sturt from 1962 to 1968 and led the club to the long overdue 1966 premiership, the first in 26 years. Unfortunately he was unable to play in the 1967 and 1968 Grand Finals due to injury.

He played 244 games, kicked 253 goals, won four best and fairest awards, was named All Australian in 1961 and played for South Australia on 16 occasions.

He is a member of the club’s Hall of Fame, was named at centre half forward in the Sturt Team of the 20th Century and in 2017 was inducted into the Australian Football Hall of Fame in recognition of his outstanding career both on and off the field.