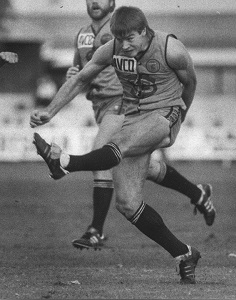 1981 The Blues at the start of the season were missing the injured Paul Bagshaw who was unsure if he would be able to play on due to a back injury, Rick Davies who had finally crossed over to Hawthorn in the VFL and Gary Hardeman who also returned to Melbourne. New recruits to the club included South Adelaide ruckman Frank Spiel and Grant Zubrinich who transferred from Norwood while new faces at training included a young Greg Whittlesea. With the uncertainty surrounding Paul Bagshaw, Brendan Howard is appointed Captain and on June 11 Paul ‘Mr Magic’ Bagshaw announced his retirement after 360 games for the Double Blues, five best and fairests, seven premierships and Captain for eight years. The Blues struggle during the season and miss the finals by percentage to finish sixth however 1981 was regarded as a rebuilding year by Jack Oatey with a number of players in just their first season. Eddie Fry wins the best and fairest and P.T. ‘Bo’ Morton retires as Club president after seven years and in recognition of his contribution over more than half a century the Club name the best and fairest award the P.T. Morton Medal in his honour. Jack Oatey decides to continue coaching the Blues for one more season and in recognition of his contribution to football in South Australia the SANFL name the medal for the best player in a Grand Final the Jack Oatey Medal.

1982 Jack received a huge bonus when Rick Davies decided to return home after 20 games in the VFL with Hawthorn, he is subsequently named Captain. Reserves coach John McInnes becomes caretaker coach due to Jack Oatey requiring a hip replacement at the start of the season and a young star made his debut in season 1982, Peter Motley against Glenelg at the Bay. When Jack Oatey returns the Blues are sitting in top place and on the last Saturday of the Minor round Jack Oatey coaches his last game at Unley Oval, a 65 point win over Woodville which ensures a third place finish and the double chance going into the finals. The Blues play Norwood in the Qualifying Final and just lose by 8 points and then play Glenelg in the 1st Semi Final and in what turns out to be Jack Oatey’s last ever game in charge lose by 35 points resulting in the club finishing fourth for the season. The Oatey era was officially over after 21 seasons, 470 games, 4 Minor Premierships, 9 Grand Finals and 7 Premierships, Jack ‘The Mastercoach’ Oatey had retired. Frank Spiel wins the inaugural P.T. Morton Medal and Rick Davies who is being used at full forward towards to the end of his career kicks 98 goals for the season just 2 short of the magical 100.

1983 Former Sturt Champion John Halbert returns to Unley after coaching Glenelg and brings with him the highly skilled John Paynter while Neil Craig rejects offers to move interstate. On Saturday May 22 history was made when Rick Davies kicks 15.4 against West Adelaide at Football Park breaking Eddie Tilley’s 1948 previous club record of 13.7. The Blues come back from being 5 goals down at the 20 minute of the last quarter to defeat Norwood at the Parade without stars Davies, Motley, Craig and Spiel who were in Western Australia for a State game and on June 18 at Unley score a record 28.26 to annihilate the Magpies by 114 points, Rick Davies kicks 11 goals for the day to tie with P.T. ‘Bo’ Morton for the most goals kicked in a game against Port Adelaide. Sturt finish second to West Adelaide on the ladder at the end of the Minor round and play Norwood in the Qualifying Final losing by 4 points, but then defeat North Adelaide in the 1st Semi Final and subsequently face Norwood again in the Preliminay Final. The Blues who had not beaten Norwood in their four previous finals games are keen to inflict some revenge and go on to win by 44 points. The Blues play Neil Kerley’s West Adelaide in the Grand Final, the Club’s first since 1978, but without a number of key players due to injury are not a match for them and go down by 34 points. New recruit John Paynter wins the first of his four P.T. Morton Medals, Rick Davies kicks a then SANFL record of 151 goals and becomes only the third Sturt player to kick the magical 100 goals in a season and young star Peter Motley is named in the All Australian team. At the end of 1983 two Sturt veterans retire, Trevor Sims after playing 250 games and Colin Casey after playing 251 games.

1984 Even before the start of the season the Blues are dealt two injury blows with veteran speedster Michael Graham breaking his leg while playing in Darwin and ruckman Frank Spiel dislocating his shoulder while new faces to the club include Adrian Moscheni from Darwin and David Frost from Glenelg. The Blues despite starting the season as Premiership contenders struggle all throughout 1984 and drop out of the finals race to finish in seventh position. Young players to debut for the club include Matthew Benson, Robert Veale, David Ey and the Captain of the Australian Under 19’s cricket team Jamie McPhee. During the season Rick Davies plays his 300th game for the club and for the second successive year kicks over 100 goals finishing with 102 for the season, the brilliant Peter Motley wins the P.T. Morton Medal while the board decide somewhat controversially to not reappoint John Halbert as Coach.

1985 Sturt appoints former Richmond Premiership player Mervyn Keane as Coach with him taking on the role of playing Coach in his first season and the club welcomes back Robbert Klomp from the VFL while young guns Todd Viney and Andrew Underwood make their debuts during the season. Merv leads the Double Blues back into the finals however Sturt lose the Elimination Final to West Adelaide and finish in fifth position for the season. On May 1 Champion and Captain Rick Davies is told that he will no longer be an automatic selection in the team and retires after playing 317 games however he later comes out of retirement and joins South Adelaide as their playing Coach after they had sacked Don Scott. Neil Craig is appointed the new Captain and Ian Willmott becomes the fourth player in the club’s history to kick 100 goals in a season finishing with 123. Michael ‘Flash’ Graham retires at the end of the season after 282 games and 455 goals as well as former captain Brendon Howard after 221 games. Champion Peter Motley wins the P.T. Morton Medal for the second time in succession, is named in the All Australian team also for the second time and finishes runner up in the Magarey Medal, but leaves at the end of season after 92 games to join Carlton in the VFL.

1986 Sturt under the SANFL’s ground rationalisation move from their traditional home of Unley Oval to Adelaide Oval. Merv Keane embarks on a rebuilding program for the club after many player retirements and Sturt finish the year in eighth place winning 9 games for the season. Despite finishing eighth a number of young players debut for the Blues in 1986 including Carl Dilena, Damian Kitschke, David ‘Big Red’ Reynolds and Kym Russell while coach Mervyn Keane is appointed for another two seasons. John Paynter wins his second P.T. Morton Medal and Ian Willmott kicks 82 goals for the season.

1987 At the end of the 1986 season Captain Neil Craig leaves after after 134 games and young star Todd Viney joins Melbourne in the VFL. Greg Whittlesea is appointed Captain and new faces to debut for the club include Jay Viney, Scott Field, Brett Lienert, John Richter and David Welsby. Despite the club falling to ninth the signs are there for the future as Coach Mervyn Keane assembles a nucleus of talented young players. Greg Whittlesea wins the P.T. Morton Medal and Robbert Klomp retires after 205 games while Doug Klar also retires after 26 years as the club’s head trainer.

1988 The Blues recruit forward Lawrence Schache and Andrew Underwood turns down offers to join Essendon in the VFL to stay at Unley. Players to debut for the club during the season include Bruce Lennon and Scott Russell. The season begins disastrously as the Blues suffer a couple of thrashings and rumours of Mervyn Keane’s demise abound, but then win 10 of the next 13 games to make it to the finals for the first time in three years, but lose the Elimination Final to Glenelg. Captain Greg Whittlesea caps off a remarkable season by winning the 1988 Magarey Medal, the P.T. Morton Medal and being named in the All Australian team however the board decides not to reappoint Mervyn Keane, a move which split the club especially after a meeting of members which presented a no confidence vote against club president Bill Kutcher was narrowly defeated, the wounds caused by this split would take many years to heal.

1989 Former Sturt Champion Rick Davies is appointed Coach and the events of the previous year and the disunity caused by it plus the loss of a number of senior players make Davies job impossible and the Blues plummet to tenth, the first time Sturt have ever finished in this position, Rick Davies resigns at the end of the season and John Paynter wins his third P.T. Morton Medal.